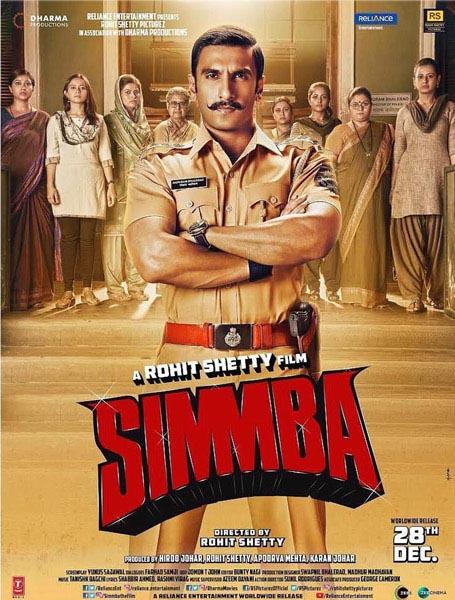 In Hindi films, there are films and there are Rohit Shetty films! Films where
– the story is remake of a Tamil/ Telugu masala hit or rehash of a older Hindi film
– the setting is usually Goa
– Usually logic is at a premium and one has to leave the brains back home
– The villains are over the top. No, no – all characters are over the top
– In 2.5 hours of the film, characters strut around in slow mo half the time
– the dialogues are as cheesy as they get
– The costumes in songs are all in bright colours
– The background score and sound engineering is all about reproducing properly the noise of breaking furniture and roaring lion
– Cars fly in the air
– Sequels follow!

Simmba falls in this template nicely and what could or should have been Singham sequel again becomes Simmba because the main lead is not Ajay Devgan but Ranveer Singh as the cop. Ranveer plays the corrupt turned responsible cop as per the brief to the T. He once again demonstrates that he is a director’s actor and can mould himself as per the role. The heroine Sarah Ali Khan has great screen presence but nothing much to do. She displays promise and will be an actor to watch for future.
The film has many masssss moments including one at the end where Bhajirao Singham (Devgan) meets Sangram Bhalerao (Ranveer )!!
Rohit Shetty doesn’t disappoint and gives a highly entertaining, massss pot boiler which wouldn’t disappoint his fans. If you just want to get 150 mins of entertainment without much to think about and also recover from “Zero” effect, go for it.