Film makers in Tamil, routinely pick up their titles from hit Tamil songs of yore, mainly to keep the title poetic and to touch a familiar nerve with the audience.  Relevance of the title to the story is seldom a consideration. J.J.Fredrick, the debutant director of Ponmagal Vandhal makes an exception. The title chosen for its poetic value also has significant association to the story.  And probably to the main star of the film namely Jyotika! 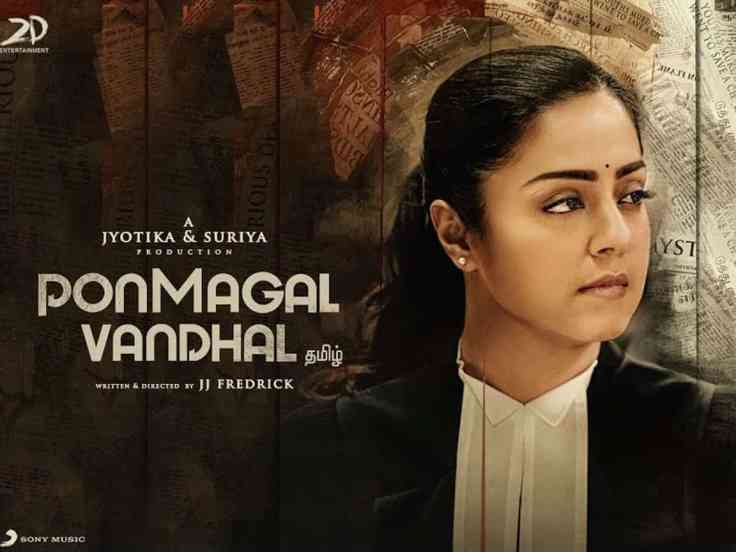 The story set in the cool chimes of Ooty is about a social issue going on in the country for many years that never got the attention it deserved – namely Child abuse/rape. Ever since the Nirbhaya incident shook the nation way back in 2012, there has been greater focus in the media and societal discourse about all types of injustice to women. Films have followed suit. In that sense, Ponmagal Vandhal in terms of genre, follows the steps of films like Pink (Ner Konda Paarvai in Tamil), Section 375 and Section 15. Of how the system comprising of the police, legal system and unscrupulous people work like a well-oiled machine not just to deprive justice but also to leave indelible scars on the affected people. And of how the protagonist takes it upon himself or herself to ensure justice prevails at the end.

In Ponmagal Vandhal, Jyotika is that protagonist, who studies law and waits for 15 long years to fight her first case in which justice was stymied.  Jyotika is supported in this journey by her dad played by Bhagyaraj who himself has been taking up the cudgel for common people as Petition Pethuraj.   In the opening few minutes, we get to see montage shots of the old case where a North Indian lady has been accused of kidnapping and eventually killing children mysteriously. She is the branded as a psycho and killed by the police in an encounter when she kills two young men, one – son of an influential politician played by Mambattiyaan fame Thiagarajan. From the time Jyotika is introduced and her character is established, it is not too difficult to guess that she is in this case not just as a lawyer but as a victim herself.

What follows is a court room drama which starts well where, Jyotika questions the prosecution of their intent and action 15 years ago by falsely framing an innocent North Indian woman when the truth was something else. Jyotika is fighting for justice for this woman who is named Jyothi. In the real world, if you remember, Jyothi was the name of Nirbhaya for whom, we had to wait for 8 long years in what we thought was an “Open and Shut” case. The naming of this character here I feel is not just a coincidence!

As the court room drama unfolds, legalities are less and drama is more. This is where the script loses pace and track after the initial promise. Parthiban appears as the lawyer of the accused and with his usual wit and smart word play infuses some element of interest in the otherwise tepid court room battle. Films based on court room battles are interesting when prosecution and defence are evenly matched and one tries to outwit the other continuously.

When each of the evidences brought to the fore by Jyotika fall by the way side one after another, it is almost end of the road for Jyotika in the battle. What follows in the name of argument is just emotional outburst to which the judge (Pratap Pothen in a forgettable role) falls for, while delivering his judgement. What keeps us invested are the twists around the interval and towards the end.

Director Fredricks for his first film, holds a lot of promise. As the writer himself,  full credit to him for the seamless “One line” to script progression.  It is the screen play where he falters. In particular, the unraveling of the knots and the court room happenings peter out at the end.

A lot of care has been taken not to portray the scenes around the child rape/abuse too graphically. Considering that the film is meant for a family audience, it is fine. But they fail to raise the pitch for the audience. Here’s where a more experienced director would have worked with his crew to shake the audience completely while being within the limits in terms of graphical depiction.

Post interval, the pace slackens, when one expected to pick up. In fact, when Partiban tells his junior that ‘climax la oru bomb vekarren paarunga’, one expected something major to happen. Parthiban is introduced as this “Rock Star” advocate with a Midas touch. (People take selfie with him in the court and even the judge addresses him strangely as Mr. Rajarathinam). But in the end, when emotions take over logic, he has nothing much to offer and almost gives up.

This is a star vehicle for Jyotika. Having bankrolled it herself, she rides it quite well. As the female protagonist who is weighed down by a sad past and at the same time who has to face the present with a confident face, Jyotika straddles both the worlds with ease. In her 2nd innings, she has transformed herself from the bubbly “Kushi” Avatar to this head strong avatar completely and almost carries the film on her shoulders. There is no male “Hero” in the film. Jyotika is that.

The supporting cast brings back quite a few yesteryear favourites from Bhagyaraj to Pratap Pothen to Pandiarajan to Thiagarajan, not all in their glory. Bhagyaraj is not his usual self but sticks to the brief given to him. The director could have helped him with more of “Raghu thatha” references to amuse us! Pratap Pothen hums the “En iniya pon nilaave’ song but doesn’t do much to remember him fondly. It is good to see Thiagarajan back with his baritone voice intact but, in these times can do with less of histrionics. If anyone understood why Pandiarajan is there in the film, please let me know.

Technically, the film is well made. Ramji’s camera captures the swinging moods of the film aptly. The songs are poignant and scored for the situation by Govind Vasantha. But a more intense background score would have helped the director to create a much better impact in the scenes that matter.

For a film to premiere on OTT directly, Ponmagal Vanthal is OTT (Over the Top) at times and underwhelming at times. It is a fantastic outing for Jyotika and a decent 1st one for Fredricks the Director. For the viewer, it’s an honestly made film, one that held a lot of promise, but fell short of being a good film.