(This piece was written for the news website thenewsminute.com and was first published on the 24th Mar, 2020 and can be read here:

Another day, another anniversary of a film release and another hashtag. Amidst this clutter though, few films deserve to be remembered and celebrated. Rajiv Menon’s Kandukondain Kandukondain (KK), which completes 20 years today since its release, is one of them. 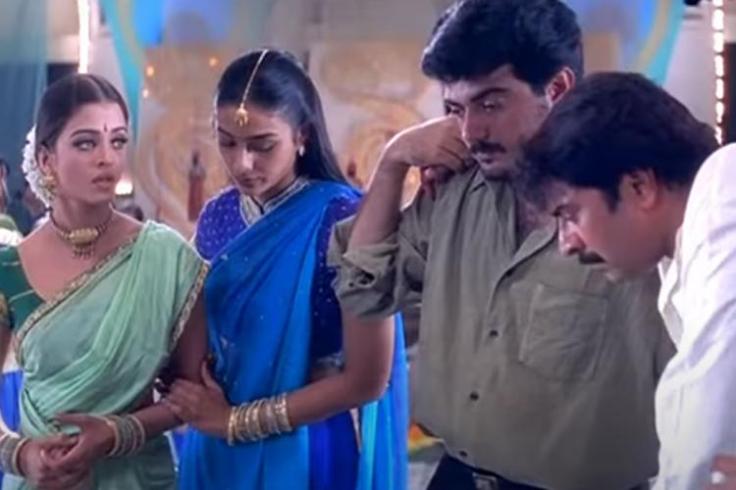 I remember watching this film in Mumbai, back in the year 2000. It was probably the first Tamil film to be released with subtitles with an intention to reach the non-Tamil audiences. The presence of non-Tamil actors like Aishwarya Rai, Tabu and Pooja Batra (in a song sequence) perhaps influenced that marketing decision. And reach it did.

The film ran to packed houses for a few weeks even in Mumbai. I vividly recall reading rave reviews of the film by Bollywood beat critics, including columnist Shobhaa De who gave a huge thumbs up for the film. Till then, good films from the south, including those by Mani Ratnam, were dubbed and released in Bollywood, which didn’t work most of the time. The Tamil sensibilities clearly got lost in translation. By releasing KK in Tamil but with subtitles, Rajiv Menon could retain the sense and sensibilities of the film.

The film itself was inspired by Jane Austen’s novel Sense and Sensibility. Rajiv Menon added anecdotes from his own life and what he saw around him to stitch together a sweet and sensitive film that would be remembered for a long time. If you think now about what made the film click, you will see that KK is akin to a well-prepared dessert with all the ingredients in right proportions.

A key factor is the way the women characters are etched, independent and strongminded in their own ways, even for those days. There is Sowmya (played by Tabu), Meenakshi (played by Aishwarya Rai) and their mother, played by Srividya. They are shown leading their lives independently without a “father figure” at home, braving the difficult situations that hit them one after another, and finally standing tall in not falling for monetary gains that come by their way as entitlement.

It’s just not the women characters. Look at the lead men. KK must be one of the few Tamil films in which almost all the lead men respect and place women in high regard. Captain Bala, played by Mammootty, is initially smitten by Meenakshi’s vivacious nature, her looks and her voice. But, he respects her choice and graciously turns into a benevolent protector when he comes to know that Meenakshi’s heart is lost to someone else. Struggling and aspiring film director Manohar, played by Ajith, likes Sowmya and promises to marry her after he is done with his debut film. He respects Sowmya for what she is and doesn’t judge her like others for being an unlucky girl. Also, though Manohar comes from a well-to-do family, he prefers to stand on his own legs, sometimes doing wedding shoots to pursue his passion of becoming a filmmaker.

Even Srikanth, the character played by Abbas, who leaves his love interest Meenakshi for another girl, is shown only as a victim of circumstances. He is not one to pose as a charmer and take advantage of an innocent girl. And what about Sowmya’s boss, played by Raghuvaran? He comes across as a taskmaster who talks tough regarding matters of work. However, he is also a fair guy who recognises and rewards efforts. He is shown as a sensitive man who goes out of his way to help a woman employee in need. Have we seen another Tamil film so feminist in character those days?

Rajiv Menon, who worked with Mani Ratnam as his cinematographer in a few films like Bombay and Guru, considers him a friend, philosopher and guide, and that shows in KK. The film has so many odes to Mani’s filmmaking style minus, of course, the staccato dialogues. In KK, characters speak in abundance and that too often in poetic Tamil with references to Bharathiyar et al.

Right at the beginning, the opening war-like action sequence reminds us of Mani Ratnam’s Roja. And there is this Iruvar type staging at the end, with Sowmya standing in her apartment balcony while Manohar is down at the gate yearning for her to say yes and accept him. There are many more “Mani moments” in KK, like the Athirapally waterfalls which appears for a split second in the opening scene, the picturisation of the ‘Konjum Mainakkale’ song, and even the eloquent narration of Bharathiyar’s ‘Achamillai Achamillai’ by Abbas reminding us of Arvind Swamy in Thalapathy. And does the name Manohar ring a Mouna Ragam bell?

There are many super hit films of yesteryears that we adored those days, but cringe when we watch now. On the other hand, there are a few films that have aged very well. Kandukondain Kandukondain is one such film. Even today, it comes across as a well-scripted and well-made film that is almost flawless. Not surprising, considering the kind of talent Rajiv tapped into to work with him in this film. Right from ace writer Sujatha for co-writing, AR Rahman for the music score, Ravi K Chandran as DOP, Revathi and Vikram for lending their voices to Tabu and Abbas respectively, and last but not the least the stellar ensemble cast.

Sujatha’s stamp can be seen all over the film but particularly in a scene involving Raghuvaran, who runs a software company, when he says, “The software market today is not what it was before. For this one project, there are 20 companies in competition”. This is the year 2000, when the software industry post the Y2K tide would soon face the brunt of competition, and Sujatha could write about it with a sense of prescience. The “vazhaipoo vadai” reference is another typical Sujatha intervention.

Rahman’s score in the film was outstanding. That Rajiv Menon has musical genes in him comes out in the way he managed to get a well-chiselled output from Rahman, replete with Carnatic music influences. Writing about the music in this film calls for a separate piece, so will keep it for another day.

Working as a DOP in a film when the director himself is an acclaimed cinematographer is unenviable. Ravi K Chandran pulled off that unenviable job with aplomb. From the choice of the colour palettes to suit the mood and characters of a scene to the picturisation of the songs, Chandran’s work in KK adds value to every frame. Along with Rahman, the credit for making the songs ageless wonders goes to Chandran too.

I’m not a fan of sequels. But I’d like to see Rajiv Menon telling us if Manohar was just a one film wonder or had more successes. Did Sowmya break the glass ceiling and end up becoming the CEO? What about Meenakshi’s singing career? Did she become a judge in a singing reality show? Did she meet Srikanth again and did the romantic in her start yearning for his company? And so on. In such a multi-polar story, there is enough meat for a sequel. And as a crafty filmmaker, Rajiv Menon has enough mettle in him to do it again.