Another Friday. Another big-ticket Hindi film release. Another flop at the Box Office. This has been the recurring theme in Bollywood this year. The latest one to suffer this ignominy is Cirkus directed by none other than Rohit Shetty – a filmmaker with many 100 crore grossers under his belt and one who is touted to have cracked the code of delivering box office hits.

When was the last time in recent memory an Amitabh Bachchan film sank without a trace in a year? Goodbye didn’t do any good to the box office fortunes. Aamir Khan who is known to have his finger on the pulse had a disappointing outing with his Lal Singh Chaddha though personally, I felt it was not a bad film. Salman Khan did not have a release in 2022. So did Shahrukh Khan. Pathan, his forthcoming release is slated for early 2023 release. Probably he and the producers wanted to stay away from 2022.  Even Akshay Kumar, the uncrowned Badshah of Bollywood had a string of flops in 2022. All and sundry who are involved with films in Bollywood are trying to wrap their heads around this bleak situation, as we speak.

IMDB the biggest online database for anything related to films put out its top 10 which looks like this:

The above obviously is based on viewers’ online feedback and hence a large extent reflects the opinion of the online viewer community.  In the above list, except for “the Kashmir Files” all the others have their origins in the South.

And if you look at the Top 10 list based on Box office numbers, it looks like this:

This is more to do with theatrical performance and obviously doesn’t take into account OTT releases. In this list, 6 out of 10 are from the South.

Having watched many films and reviewed them, I was wondering what my Top 10 list will look like. Before we get to that list, a few disclaimers are in order. I haven’t watched ALL the films that were released in theatres and OTT in 2022.  Maybe, I watched 25 to 30% of the releases. Also, my list covers only Hindi, Malayalam and Tamil films which I actually watch more often than not.

Based on the above, purely based on my take, the top 10 list for 2022 from what I have watched looks like this: 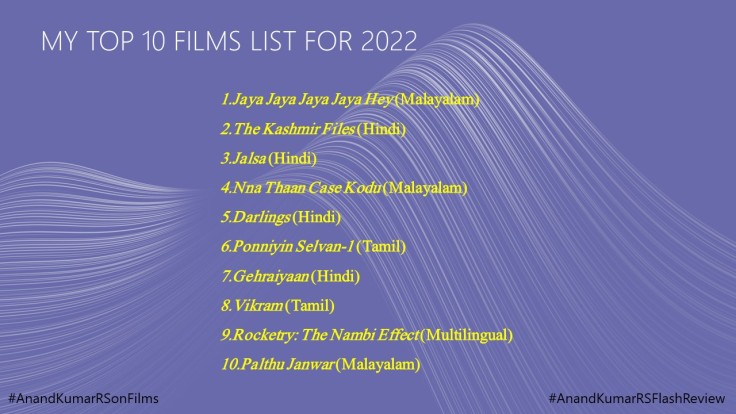 As I compare the lists, it is obvious that my list has more small budget films and those which do not have “Stars” in their cast but even in this list, 7 out of 10 are from South India. Somehow, the films that were much talked about this year like K.G.F: Chapter 2, RRR, Kantara and Sita Ramam didn’t somehow make it to my Top 10 list.

This is my last post for this year on films and I would like to take this opportunity to thank you for reading my reviews and sharing your feedback on the same. As we step into a new year, I would be taking a break from “Flash Reviews” for now. Will probably share my thoughts on a film in a different format in the coming new year.

Coming back to the Top 10 list, please do share your Top 10 list or any other thoughts in the comments section. See you on the other side.