I had missed watching Vikram when it was released in theatres and so caught up with it this weekend when it dropped on Disney-Hotstar! The best part of the film is, it unabashedly sticks to just action as a genre and doesn’t even attempt to go anywhere else. But is that enough to keep you engaged in the film throughout? The answer depends on if you a fan of this genre or not. 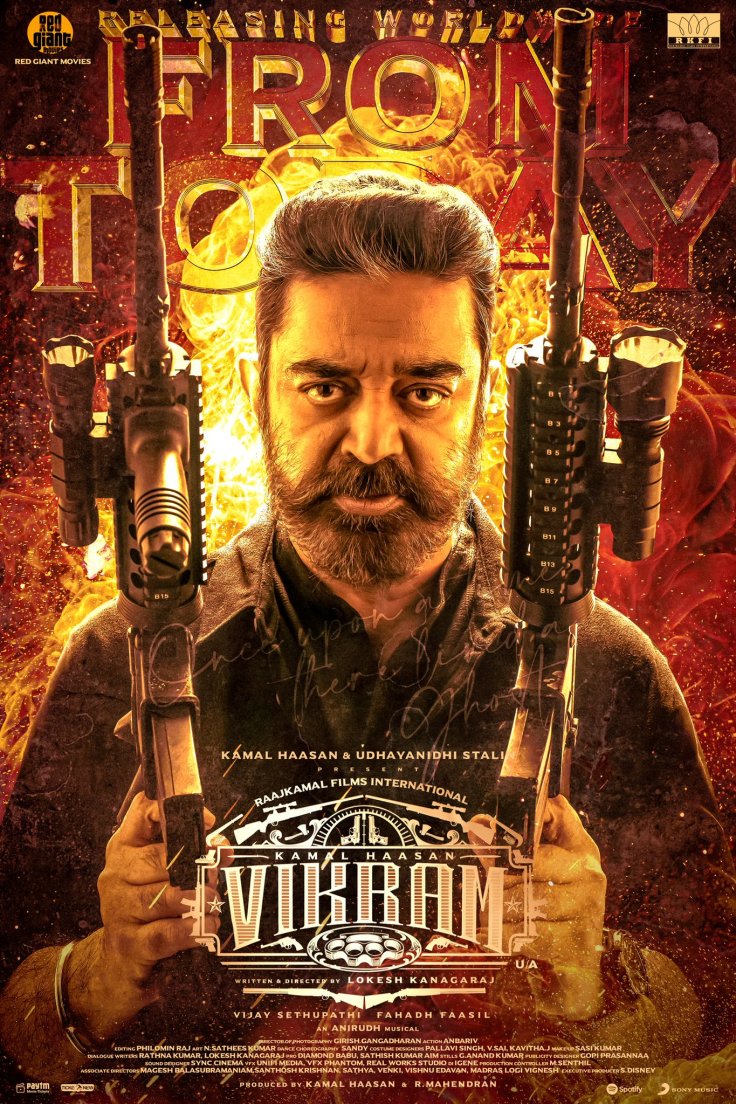 There are guns, sickles, knives and more guns. Even the fonts in the title credits are styled around different types of guns. Director Lokesh Kanagaraj has bet more on the action sequences bailing out the film than the story or its star Kamal Haasan. For those who like action, blood, gore, fire, explosions, blasts, ear splitting noise and killings, this is the film to watch multiple times over. Kamal has himself said many times that he likes to show gore in its purest form in his films but often restrained himself. But Lokesh proves to be a baap in this game and one can see Kamal playing ball, relishing every frame soaked in gushing blood. Much of the film’s budget would have gone arranging different types of guns and containers of blood.

The story revolves around under cover agents trying to prevent a huge haul of drugs from reaching the villains. Kamal reprises the role of the spy agent Vikram whom we are familiar with from the Vikram of 1986. This whole connection with the earlier Vikram looks contrived and forced in my opinion. It could have been another standalone spy film actually. There is another set of undercover cops and so you can say that this film apart from being about drug cartels is also about undercover agents. There is a child sentiment which is brought in between which doesn’t gel at all with the flow.

The film’s pace keeps you engaged except for very brief spells in the 1st half when it slackens. For over 3 hours, it is too long and certainly Lokesh could have done away with some scenes or reduced the length to keep it sleeker. As I mentioned, the story is all about the action set pieces that are strung together.  So, when one action sequence ends, we get into another and so on in the whole film.

Kamal excels in his role in a genre which he clearly likes and enjoys. Fortunately, he plays his age and even in the tough action sequences he seems believable. You can notice the sag in his voice due to age but that’s one thing for which you will have to cut him some slack. Among the huge cast of some very famous and some new names, it is Fahadh Faasil who takes the cake with his very calm and intense acting as a leader of another agent group. Vijay Sethupathi as the lead villain gets a lot of screen time and tries his best to be the ferocious gang leader but with mixed results.  But the film’s “massiest” moment is reserved for one supporting character coming in as a domestic help. I am sure we will be soon seeing memes around Agent Tina!

Clearly the film belongs to the stunt director duo of Anbu-Arivu who bring to the screen the vision of the director in the stunt sequences. They are all well planned and executed meticulously. Needless to add, the back ground score of Anirudh lifts the sequences by a few notches.

Making films with stars like Rajinikanth, Kamal Haasan or Vijay is not easy these days with the burden of expectations in the Social Media age. One mis-step and you know what happens. We saw this in recent films like Annaatthe, Valimai, Beast etc… Lokesh Kanagaraj escapes falling into this trap with a film that he has earnestly made well within his strengths.  It’s a film worth watching once if you are a fan of the action genre.

Having said that, is it such a great film to become the top grosser in Tamil cinema ever? Is it worth the over flow of plaudits all around?  Was I blown away by the film? Well, only my ears were.