I wondered why such a seemingly big film went for an OTT release just when smaller films were getting good response at the theatre. I got the answer half way through the movie. Atrangi Re opens with a bizarre sequence where the lead girl played by Sara Ali Khan is being chased by a few men and after some wrangling, she returns back home as if nothing much happened. You wonder what the director and writer are up to. 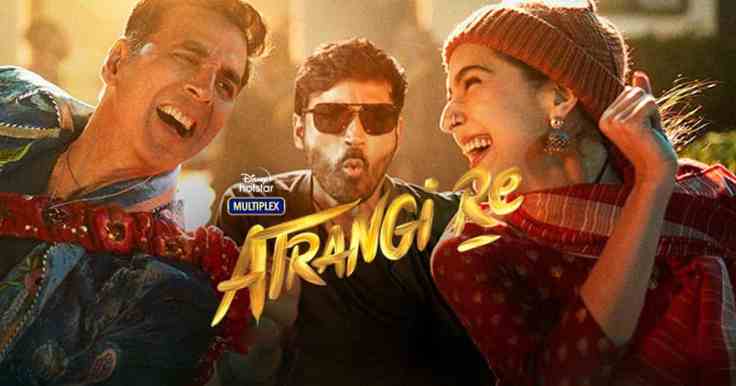 The initial sequences in the film arouse a lot of interest. We understand that the makers are trying to do something different here. The sequence where a random young man (Dhanush here) is getting kidnapped, drugged and finally made to marry the lead girl by force seems completely unbelievable. But then we realise that this is set in small town Siwan in Bihar, a state which was notorious for its kidnapping and Jabariya shaadis!  But just as we are led to believe that it is a love triangle story, things get messy and film loses control.

Director Aanand Rai and writer Himanshu Sharma have a penchant for coming up with “hatke” stories set in small towns in North India. They try to do the same here without realising that beyond a point the audience is not with them.  In the second half, things really get weird and messy and what promised to be a lively film ends up being a dud. Just like Rai’s previous film “Zero”, if I may add.

This is the second Bollywood film in recent times that features a Tamil groom and of course Madurai!  Thankfully the writers keep this portion light without getting into cultural stereotyping.  Sara Ali Khan is the next Phataka-Munphat character in Hindi in the lines of Kareena and Alia. She helms the role very confidently but is run down by the proceedings of the film in the 2nd half. Dhanush saves himself with a fine performance as the main protagonist who is torn between his love and the feelings of his lover. He manages to show the right emotions without getting bogged down by the Hindi lines he had to speak by himself which he manages well.   Akshay Kumar who completes the 3rd character in the triangle, otherwise energetic on screen, looks jaded and sleeps walks through the role.  Being one of the producers did he see the writing on the wall?

The film is colourful and some of the framing of the scenes are a delight to the eyes. A.R.Rahman’s songs are fantastic except that you cannot miss the repetitive ring to them. Rahman’s songs of late all seem a copy here/paste there of his earlier songs to me.

Opting for an OTT premiere looks like was a smart “Cut Loss” move for the makers. Atrangi Re – meaning funnily weird is indeed a weird film but with little or no fun. Even on OTT, this one can be missed.

4 thoughts on “Atrangi Re – My Flash Review!”