Skip to content
Paava Kadhaigal (Stories of Sins) is the latest addition to the anthology genre in Tamil and is streaming now on Netflix. It has 4 shorts helmed by some of the big names in Tamil cinema and hence holds a lot of promise. The individual episodes directed respectively by Sudha Kongara, Vignesh Shivan, Gautham Menon and Vetrimaaran deal with the common theme of honour killings and are all mostly set in rural Tamil Nadu where such practices exist to date. As the title suggests there are sins committed galore in all the stories but with no closures.
In dealing with such a subject, the stories are dark, disturbing and heart rending. The 4 film makers handle the theme in their own way in terms of the story and intensity. 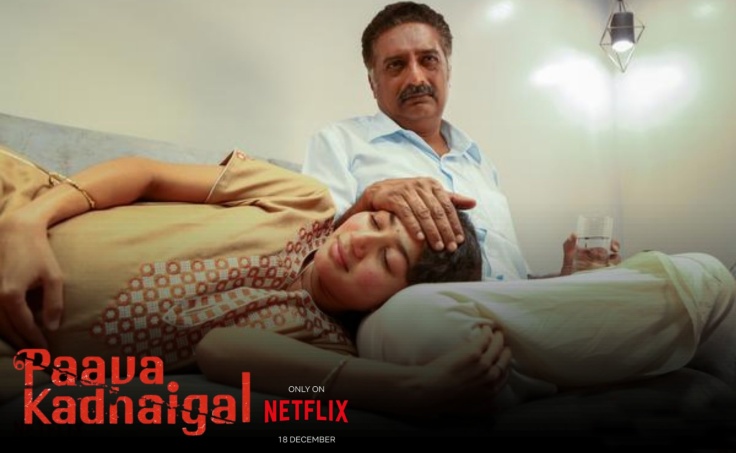 “Thangam” directed by Sudha Kongara deals with the tough subject of lives of transgenders with a inter faith marriage plot intertwined in it. Kalidas Jayaram in the role of the transgender character is a revelation and is an actor to watch out for. I thought the director could have pushed the envelope in the climax that would have left a more telling impact.
Vignesh Shivan’s “Love panna vuttaranum” is the weakest link of the 4. He weaves in some humour in a serious subject which works only partially. The plot deals with twin sisters who want to marry of their choice but cannot as their patriarchal father will not let them to marry outside the caste. The treatment to a subject like honour killing is very callous here with even the end seemingly very contrived.
“Vaanmagal” is most “Un Gautham Menonistic” in every sense of the term. The plot, setting and the making etc bring GVM out of his comfort zone completely . I must say he has faired very well. The story deals with the rape of a minor girl and the after effects of the unfortunate incident on a middle class conservative family in rural India. Simran makes her debut on OTT platform as the girl’s mother and she is just brilliant as the mother who believes has to carry wounds for life. GVM also turns in as the father of the girl with a so-so performance.
Vetrimaaran’s “Oor Iravu” is the most gut wrenching of all, the impact of it stays with you for a long while. What starts as a familiar family wrangle where a daughter decides to marry out of caste and moves away from the family, ends up as a commentary on the malaise called caste differences in India. Prakash Raj as the father and Sai Pallavi as the daughter kill it in terms of their performances. The last few minutes in this film are extremely disturbing but you exactly know how this will pan out. No surprises here.
All the four episodes are made very well technically. While the shorts are all very high on impact and certain to move you, none of them leave any hope. This is disappointing and would have helped if at least one or two of the stories ended positively thereby offering some hope.
Watch Paava Kadhaigal if only you are a fan of serious, emotionally draining cinema. I have tried my best not to put out any spoilers here.