When a film is talked about so much before the release about its making, one tends to get circumspect. Is it that the content is weak that they are talking more about the “form”? – is the question that comes to the mind. I had a similar feeling when Mahesh Narayanan’s Malayalam film, C U Soon was released on Amazon Prime Video for Onam. But thankfully, C U Soon stands out for its content as well as the form. 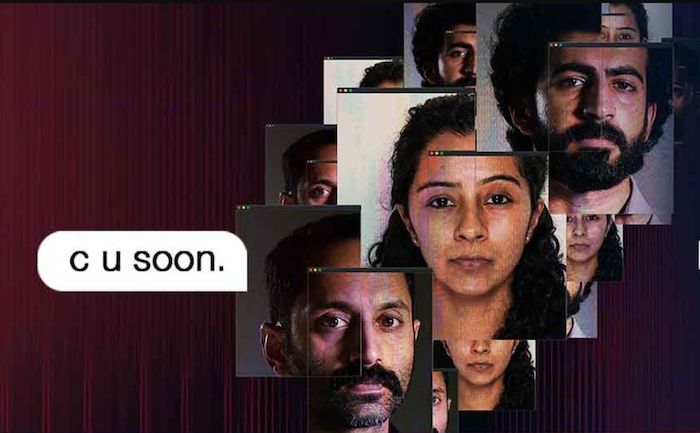 In general, every film has a setting. C U Soon is set in Cyberspace among multiple screens which we are all hooked on to, these days – laptop screen, mobile screen and dabbling between various tools like WhatsApp calls, Google hangouts, Team Viewer and Facetime calls and so on.  The film starts with man and a girl living in the UAE, getting connected on Tinder and in the course of few online chats they end up falling in love. Everything moves in such a fast pace that you await for the whole thing to take a nasty turn with a grim sense of foreboding. And very soon it does. How the man’s friend then helps to come out of the mess is the rest of the story.

Mahesh Narayanan, who has also conceived the story and written the screen play is brilliant all the way. I was most impressed with the attention to detail required in films of these kinds. Getting the proper screen angles, the icons, the chat language, the tools being used on the computer etc. require a lot of planning and execution and Mahesh does this very well. In such films where most of the time we see characters talking to screens and responses being received on the screen, the editing needs to be sharp. Mahesh Narayanan who himself is an acclaimed editor, brings his expertise brilliantly in the film and that is very visible when you watch. The same goes for Sound design (Kunal Rajan) as well.  The sounds of different notifications, typing on the key board and other stuff have all been presented very perfectly that you feel being part of the online chat yourself.  On the technical side, the camera work which has two parts – the regular one by Sabin and the virtual one by Mahesh himself are top class and in some scenes I was really impressed by the approach. So, for example, during a video call when the person hides the phone for a minute due to some interruption, what you see in the screen is a view of the place from the floor and so on. Technically the film is brilliant in all aspects.

There are very few characters in the film. Among the cast, Roshan Mathew as this restless man in a hurry, Darshana Rajendran as the girl in distress and finally Fahadh Fazil as this cool “IT guy” who cracks the mystery just sitting in front of a computer with a phone by the side, occupy most of the screen time and play their parts well. And this man Fahadh is on a roll!

When the film is over, you get a frightening sense of the digital footprint one leaves these days! The film clearly depicts that privacy and cyber security are just fashionable myths after all.

The film has been shot during the lock down period with minimum resources. For such an experimental film, it is almost flawless. It would be very interesting if the makers release a short film on the “Making” as well. So, kudos to the team for pulling off a brilliant film which is exceptional in its making while at the same time keeping you engaged in terms of content.  I would put C U Soon in a “Must Watch” category. Even if you don’t follow Malayalam, C U Soon is worth catching up with sub titles.  Did they make a hint of a sequel at the end?